I’ve tried, but I can’t put it off any longer – it’s time for a new author photo.

I hate them. Childbirth would be preferable and I think I probably look better in the throes of that than I do squinting and squirming into a camera lens.

I worked in a newspaper office once and it was curious to see how many people there were wandering around the building who resembled those in the columnists’ photos only much older and pocked-marked. It was as though I stumbled into a Dorien Gray’s attic where all the portraits had come alive. Private Eye does a running gag on the way that columnist’s cling onto ancient photos of themselves (here, with apologies to Robert Crampton, who I think looks rather nice in the more recent one). 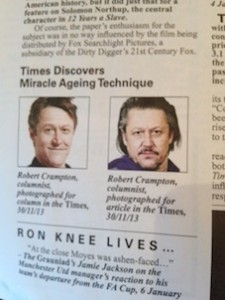 It’s assumed that vanity is what makes these writers try to present a younger and fresher version of themselves to their readers, but I think is fear of photographers rather than fear of ageing that drives it. Since I’m not of the selfie generation, I’ve never been able to reconcile the two-dimensional image with the vision of myself that I have in my head. In the latter, I’m an animated, positive person. In the former, I look so tired and crotchety and not the shape I want to be.

The author photo is there, apparently, to communicate something of yourself when you’d rather your work did that for you. Are you a moody, black-and-white sort of author? Or a grinning one whose work runs the risk of being dismissed as lightweight? Do you look into camera or moodily into the middle distance? How much flesh do you show and how much make-up do you wear (and that’s just the men)?

A quick google and you can see how some authors have managed to match perfectly their writing persona with the visual image. Zadie Smith looks glossy-magazine gorgeous in her headscarves and yet at the same time, someone to take seriously. Donna Tartt has married her eccentrically unproductive work rate to a severe bob and mannish suits. I worship Doris Lessing’s plaits. (And yes I’m aware that all three of these examples are women. Sadly I think there’s more scope for analysis with female portraits).

The ones of me you can see dotted around this site were taken about three and a half years ago and were a second attempt. In the first round, I was wearing jeans which work less well in photos. My hair looked so flat it was as if the top of my head had been sliced off. Our eyes have become so accustomed to big bouffy hair that when an image of ‘normal’ relatively thick hair is presented it seems unnatural in its naturalness. Worst was my expression. I had never realised that my face in repose is downright gnarly. I looked, in casual parlance, a right stroppy cow. If I am not actively grinning, I appear antagonistic. This I had never known and made me realise how intimidating I can look when I am in neutral. 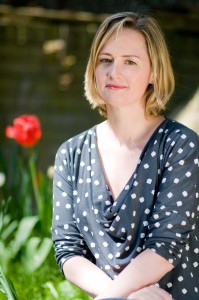 Here it is on the right – grumpy aren’t I? Compare it to that one on the top of the page where I am doing a reasonable impersonation of someone who is content with life, smug even.

With utter vanity, I got my lovely friend Sophia to do another set, which she did so with grace. This time I was as pleased as I could be and learnt that I need a professional blow dry and a ton of make-up to face the lens.

Of course, it could be argued that it’s all nonsense. We’re not actors or models, why should it matter? And while this is true, it’s our presentation to the world and one which we have relative control over. I don’t get cover approval, but I do supply my photo. I wish I could have no photo, but at the same time I know that I’ve flicked a book over mid read to have another look at the author’s image (never more so than during my current read, Americanah, to look at just how Chichmanda Ngozi Adichie does her own hair, braiding being a theme of the novel).

So why am I putting myself through it again when I could get away with the old photos? Because I do bits and pieces of journalism, these photos have been used in magazines as well as in books and on websites. They run the risk of being over-used. I’ve a new book coming out in May and one set of photos per two books seems about the limit. I don’t want to be one of those journalists that I remember from the office who looked as if they were ashamed by the passing of time.

I’ve been putting it off with terrible excuses (‘Sophia, I’m just waiting to lose that Christmas weight’), but now I can no longer. Next Tuesday is the day.

The results will be posted later…
PS

So here is one of the new batch, as promised/threatened, the result of Sophia’s labours. She really is a joy that woman, I cannot imagine anyone making the process of having a headshot done more palatable. She is very tolerant of neurotic ranting and of the fact that I had to postpone because my face came out in this horrible bubbly rash thing. This is not actually the one I’m using for the book author photo, I’m going for a more wryly humorous look for that one.