The contrast between writing books and publicizing them is like the difference in wearing comfy slippers and vertiginous heels. And I mean that literally as much as metaphorically.

Writing is about being alone or, if like me you work in a library or cafe, alone among others. Your only company is your characters and, as mine are never straightforwardly heroic or sympathetic, this is not the jolliest of parties. Well-meaning friends and family gently ask to be invited, with polite inquiries as to hows it going and what’s it about. Their courtesy is rewarded with curt ‘oh you know, life’ which is barely disguised code for ‘please don’t ask, I don’t want to talk about it.’

Contrast this to post publication. Talk about it? If required, I don’t shut up. Thanks to the tireless work of Karen and Lucy at Hodder’s publicity department, I did at least a dozen radio interviews to stations across the world from Glasgow to Dubai and Marbella especially to publicise my second book, The Pile of Stuff at the Bottom of the Stairs, as well as an interview with a national newspaper, television appearances and many first-person pieces.

Although by the end I’d became quite fluent in my spiel it was not without mishaps along the way, some of which still have me blushing in remembrance. There was the interview with my favourite newspaper in which the journalist, someone who I had known and always liked, described me as looking like ‘a cross Teri Polo’ (for those who don’t know who she is, which is pretty much everyone, she’s Ben Stiller’s wife in Meet The Parents). She then quite ruthlessly pilloried me for being too narrowly domestic and maternal in my concerns despite having written a book about pregnancy herself and spending the entire interview fretting about the fact that her cleaner was about to be deported.

Very early on in my journey of self-publicity, I appeared on Radio 4’s Loose Ends. It’s like being in the scariest pub session in the world where only the shoutiest and funniest win, neither of which I am. One of my fellow guests, the historian David Starkey, turned to me at the end and said ‘that’s why Clive [Anderson] and I love it, it’s all about having a rapier wit.’ I said almost nothing during recording until, for some reason still unbeknown to me, I found myself saying the words ‘I’m obsessed with cornflakes and poo. Thankfully, when the show was broadcast this piece of rapier wit had been censored. 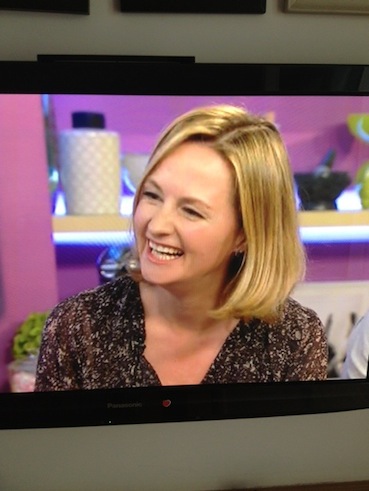 At least on Loose Ends you don’t have to look good. I also went on The Vanessa Show on Channel 5, where despite the loveliness of all the backstage crew, I felt crippled by the self consciousness of sprayed-on make-up and bouffy hair. (Here I am pictured left – you wonder why laughing doesn’t cause my make-up to crack, such was its thickness).

Fellow writer Jenny Colgan tweeted a photo of herself taken back stage at the same programme, being warmly embraced by the ex Mrs Sylvester Stallone, Brigitte Nielson. I too was on with a Sly ex, the model Janice Dickinson, but I didn’t charm her in the way that Jenny clearly did Brigitte. As I watched the show back, I first wondered who that posh-voiced ageing wag was (it was me) and then noticed that whenever I spoke, Ms Dickinson couldn’t stop herself from pulling faces of boredom and disgust (or as much as the surgery and Botox allows her to). She mocked the notion of couples arguing over domestic details, boasting of how hot her man and her were for one another. No one pointed out that her partner was her boyfriend of just three weeks, a lad half her age who’d she met in a club and with whom she’d been vigorously necking in the green room.

The experience that was furthest from my comfy slippers writer’s existence was being styled and photographed for Grazia magazine. Tiny Fey writes brilliantly about being a non-model in a glossy shoot, noting that the stylist’s assistant’s job is ‘to stuff a middle-aged woman’s bare ass crack into a Prada dress and zip it up.’ I’m no size zero (or even size single figure), but the Grazia stylist, photographer and make-up artist were so charming and lovely that I began to believe that I was Cara Delivingne. ‘Smile with your eyes,’ the photographer demanded and I channelled my inner Tyra Banks. ‘Pretend to walk towards me,’ he said and I had no choice but to pretend since in my 7-inch strappy Guccis I couldn’t actually move. ‘Let’s try this on,’ said the gorgeous stylist picking up what I judged to be a snakeskin jacket that I might have worn with white shoes in the 80s. ‘What is it?’ I asked. ‘Oh a McQueen,’ she said, ‘it would retail at £5,000.’ I looked out the my living room window to our Ford Focus estate, for which we’d paid less money. Thanks to their encouragement, I began to swish my hair and happily stood on my street for all the neighbours to see. I felt, to use model parlance, ‘fierce’. Well, I did until I overheard the photographer and the stylist discussing the shots so far: ‘hmm she looks a bit mumsy, we were specifically told not to let her look mumsy…’

The publicity rounds gave me a small vista into what it’s like to be a celebrity and how addictive the attention is. A very small vista, obviously, since it’s not as though anyone knows who I am and I’m in no danger of being papped. But I can now see why someone like Sally Berkow or Kerry Katona might crave more and more publicity, despite their wanton self-abasement appearing incomprehensible to us normal people. Even in my small way, I tasted the way that publicity fills you up but ultimately leaves you feeling hungry for more, in the way that your blood sugar levels go awry when you have something sweet and you feel out of kilter.

Despite the glamour of designer clothes and someone else doing my make-up, I’m still happiest in those comfortable shoes.